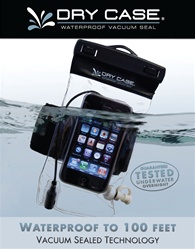 I received some samples of the Dry Case as free samples to review. http://www.drycase.com/

DryCASE is a flexible, crystal clear waterproof case that allows complete use of your phone or camera while keeping it dry and clean. It waterproof up to 100Ft for an hour( they actually tested this I saw pictures of  diver under water with his phone strapped to his arm!)  Because its vacuum sealed and the case is completely clear you can still use your touch screen. There is even a Head phone jack so you can use water proof head phones with it.  They come in a variety of sizes from big DryCases to fit Ipads and tablets to medium ones for cell phones to smaller ones for MP3 players. Prices range from $39.00 to $59.00 depending on the size of DryCase you get you can find them hear at http://www.drycase.com/
﻿

So I have to admit I am a bit of a chicken when it comes to getting my electronics near water. I love my Galaxy Tab and I want to protect it I would never think of taking it to the beach or pool. I also Like my Cell Phone its not a fancy phone but It works.  So when the DryCase came I was excited but a little worried about actually testing it on my beloved Galaxy Tab or my phone for that matter. So I took my daughters play phone you know those cheep ones that play the annoying sounds. (ok i admit it, i was secretly hoping it would fail and I would be rid of that thing lol) I put the camera in the small DryCase snapped the locks shut they are a little tough to get snapped shut but I wouldn't want them to be easy to open. I then attached the suction bulb to the white port and sucked the air out tell the bag was flat with no air. I removed the suction bulb and closed the safety cap. I waited the recommended 10 min to be sure the seal was good then I tossed it into the bath tub full of water and left it for a while. an hour later and 2 clean kids the seal was still sealed and the play phone still looked dry. I dried off the out side of the DryCase and opened it up. Yup the dreaded play phone was still dry and working Just fine. My daughter even ask if we could put it in the Fish Tank and I thought why not lets do it. She had a blast and my phone stayed dry and it still works I actually received a text while it was in the fish tank. Now the Small DryCase says that it can be used for a camera if you wanted to use the camera while it was in the DryCase it would have to be one that did not have a expanding lens as the case is vacuumed sealed so it would damage the lens if it couldn't expand.

So I put my Galaxy Tab in the Big Drycase I repeated all the step and Sucked all the air out. I knew it would keep it dry I just wanted to test to see how well the touch screen worked thought that thick plastic. I turned it on (kinda hard to press the side button on a galaxy tab but if you position the plastic just right when you are sucking the air out Its a little easier.) the first test would the touch screen work well enough for me to unlock the screen Yup select an app yup I can do that too. Do my home button and email button work Yup that works too. I haven't had any problems at all with the touch screen on my galaxy Tab I left it in the dry case for 2 days tell the battery ran dead and I had to take it out to charge it and I never had any problems with the touch screen. I let my girls run around with my galaxy tab during those two days and the DryCase held up well it never lost its vacuum seal. My daughter even spilled milk on it once and it stayed completely dry. I even let my daughter take it out and put it in a rain puddle in the drive way. I did take a few pictures with my Galaxy Tab in the DryCase and I thought they turned great I was surprised that they turned out through that thick plastic But they did! 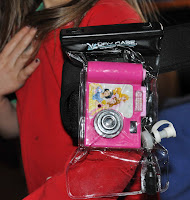 I wish I had a DryCase when we were living by the beach It would have been so handy to keep my point and shoot camera dry and sand free while playing in the surf with the Girls. I probably would still have that little camera today. I don't think I mentioned it before but Your Dry case comes with a Neoprene Armband so you can keep your phone or MP3 player on your arm while you are swimming or playing in the water. No worrying about someone stealing your camera or phone while you are swimming walking or playing in the ocean. I think I will take my camera on a float trip this summer! Check out there Youtube videos of people getting there Tech Wet!