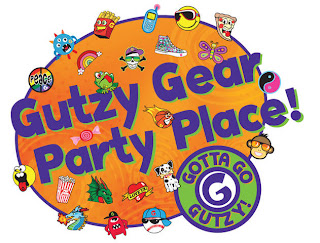 So you probably want to know what Gutzy Gear is right? Gutzy Gear is a great way to express yourself by customizing your backpack, Sports duffel, messenger bag, and a lot more! Gutzies are cool removable patches. They stick to a Gutzy strap cover tat you can put on any strap. There are 56 Gutzies in a series and new Gutzies are constantly being introduced. Kids can collect and trade them friends and family. Gutzy Gear is about showing the world who you are in a fun way.  Check it out hear http://www.gutzygear.com

This past weekend we held a Gutzy Gear Party at our house. We called up friends and family and ask them to come over. With a bunch of kids piled around the table we played some Gutzy games had some snacks, and got the kids excited about going back to school. I started out by giving each one of the kids a Gutzy strap cover. I opened up all the Qutzy patches and put them in a big bowl in the middle of the table and we let the kids take turns picking out a Patch to put on there Gutzy strap. We had a few arguments over who got watch patch but once they found out they could take them off and on and trade them around they were excited. The kids ended up trading patches several time by the time they went home. They all left excited about heading back to school in a few weeks to show off there new Gutzy Gear. I even loved them and made some for my camera bag and now I want the Shady and beach bum Gutzy.

The Strap covers sell for about $9.99 and the Gutzys sell for about $4.99 and you get two in a pack. Not a bad price for something fun for your kids to do that they can use and change around all year long.  If you don't want to order your Gutzy Gear on line you can find them at Walmart, Target, K-mart, and Toys r us.

We received the materials for the Gutzy Gear party free of charge as part of a Mom Select Party Hosting Package. The kids had a great time Thanks Gutzy Gear and Mom Select!!!
Posted by Julie at 7:05 AM