Me and the girls spent the last 4 days in camping bliss. We did not do primitive camping this time. We went to the camp ground at the lake. It rained cats and dogs for two days of the trip but we had an amazing adventure. We hiked in the rain we biked in the rain we discovered ,that the slide at the play ground turns into a slip and slide when it rains a lot. The girls played in the mud so much I don't think their clothes will ever come clean. We squeezed in 3 science experiments, and we crashed a public schools field trip to the dam on accident but the park rangers didn't seem to mind that we were listening in.  We put up the movie projector under the awning and watched Big hero 6 in the rain. I think we had a few other camper watching from the windows of there camping trailers and kids kept riding by on their bikes to watch the movie. We ate way to many Smores and probably too many snacks.
I thought I would share a couple pictures from the trip it rained so much I didn't get a chance to have my camera out all that much. There is a picture of our camp fire I included this picture just for my brother in law incase he reads this post. He had tried t build a camp fire so we could make dinner. After a failed attempt or two or three the moms had to take control or we were never going to eat. If you ask Snoopy Girl she will tell you that all you need to build a fire is: wood, a mommy, two paper plates, and a lighter.  As you can tell from the other picture the lake was nice and full. They even had to let out more water while we were there. The opening of gates sounds like thunder incase you have never had the chance to experience it. Even with all the rain we still had a blast and we cant wait to do it again. I think me and the girls could spend the hole summer as camp host. 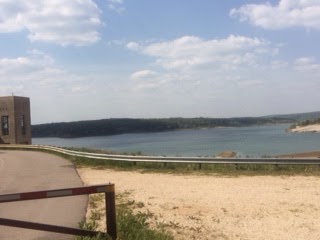 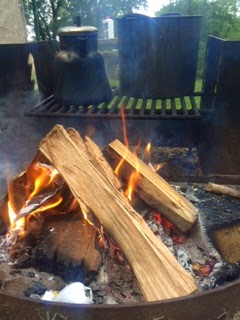