Even thought summer is hear in Missouri Its snowing in our kitchen.Today we tried out the Snow to GO product.Its an artificial snow that looks just like Real Snow http://www.instantsnow.org/instantsnowhome.html.

Snow To Go! powder makes snow instantly, in seconds it makes artificial snow that looks like real snow and feels cold to the touch. Instant Snow to Go is non toxic and environmentally safe. It requires no mixing and makes snow that is Fluffy and Not Sticky. Instant Snow To Go comes in a variety of choices Instant Snow To GO!, Fairy's Frost, Snowball To Go! Ornaments, Snow cards, and Novelties. All of them can be found at various retail stores around the country or for bulk purchases you can go to www.intantsnowtogo.com


Snow To Go! is super affordable.  these are the Suggested Retail prices for Snow To Go!

Me and the Girls had fun trying out Snow To Go! I was surprised at how much a little scoop of Instant Snow To Go! really made. As you can see in the pictures that little blue scoop made a hole cup of Snow. Its crazy easy to make my 2 year old did and it only takes about 2 seconds for it to expand. You place a scoop of Snow To Go! in a cup or bowl and add a 1/4 cup of water and it rapidly expands.  I let the girls make a bowl of it and we hid different objects in it letting them use it as a sensory tank. Since its cold and feel fluffy its great for kids to explore in. Its super soft and fluffy and It actually feels cold to the touch.  My girls though it was AMAZING as my 4 year old put it. Its not really sticky but it can make a bit of a mess if your letting your kids play with it. The Girls had it all over the table.  It looks amazingly real around a miniature Christmas village which we will be putting up this year. It would look great around some candles as a center piece. Even a Party Decoration I wish I would have had some last august when my 2 year old had an Ice castle Birthday cake. This would have looked amazing on our gift table. Now I am trying to find another winter themed birthday idea just so I can fill a table with it. It has so many different decorating possibilities you just cant go wrong with it.

The Snow To Go! is a little wet and it might damage a surface that is not made to with stand moisture. We used some clear plastic wrap to protect the table. You can let Snow To Go! dry out and reuse it again later. Good luck getting it back into its original container. Its tightly packed and I could not get it to pack back down. I just put our in one of those plastic food storage containers that have the lock on lids that have the rubber gasket on it. We have used it and let it dry back out about 5 times now and so far its gotten just as fluffy as the first time we made it. The little tub that I let the girls play in is looking kind of dirty now from there hands. But they still love it and we have snow on our kitchen table in the Middle of Summer.

I would also like to add that Snow To Go! can be slippery when wet. Please watch your kids if you let them play with it don't let them eat it as it could pose as a choking hazard always watch your Kids. 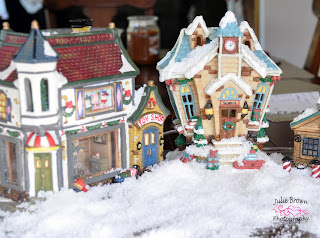 Disclosure: I received these products at no cost for review. All opinions are my own or what my kids thought of the product.
Posted by Julie at 10:42 AM