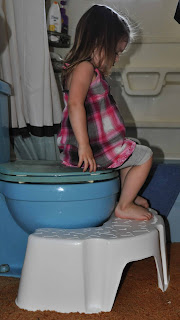 Most moms look forward to the day there children start Potty training. I was one of those moms. I started potty training early with both of my girls. They showed interest very early on. The trouble was at 12 months most step stools were just not tall enough. This is where the Looster Booster comes in. It is a Mom Invented, American Made step stool that is very unique in its design. The Looster Booster is a C shaped step stool that fits around the front of the toilet bowl so there is more area for your little one to stand on. Its taller than a standard potty step stool so that younger children can use it with ease. Its got a great non skid pattern on the top so your little one doesn't slip. Looster Booster was the 2011 NAPPA Gold Metal winner. It sells for $34.99. It can be bought hear http://www.littlelooster.com/ and places like walmart, toys r us, and diapers.com. You can go hear for a list of places that sell the Looser Booser http://www.littlelooster.com/pages/stores.
My youngest is 2 now and potty trained. But she still needs a step to get on the potty and in no way wants my help. So I though this would be a cool product for us to review. The Looser Booster arrived in a big brown box via UPS. My first thought was this thing is BIG.

Even though the Looster Booster is big for our space it does its job well. We have a very small bathroom I am talking sit on the potty wash your hands in the sink and put your feet in the tub at the same time small. the step fits around the front of the toilet and gives my little one a nice area to stand on. She can get on the potty from several different angles. She can climb on it easily and has room to stand and get her pants down. She can sit on the potty and her feet touch the Looster Booster giving her a flat sturdy surface to help keep her steady on the potty. So she doesn't have to hold on to the seat to keep her balance. My four year old can get on the potty on her own with out the aid of a step but she likes it and says its easy to use and doesn't mind using it. thought she wouldn't let me take a picture of her climbing on it. I love that it doesn't tip over like one of our other step stools does. the non skid design on the top works great we haven't had a slip yet. Its also easy to clean I toss it in the tub spray it with a little cleaner and rinse it off. 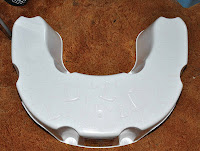 As an extension of the toilet, the Little Looster never needs to be shuffled around the bathroom. All grown-ups can use the toilet while standing or sitting without needing to move it out of the way.

I find this to be true for the most part. I personally don't need to move the Looser Booster out of the way. But Grandma finds it to be in the way some. It may just be because she is shorter than I am.But  Its light weight so moving it is not a big deal for her.  I think our toilet may be a little shorter than most its an older one so I don't think the Looster Booster scoots in as close as it would with a taller toilet.


I think its a great Step Stool for potty training. Its just the right height for those early trainers who need some extra height to get on the potty.

Disclosure: I received the Looster Booster at no cost for review.  All opinions are my own.
Posted by Julie at 3:16 PM