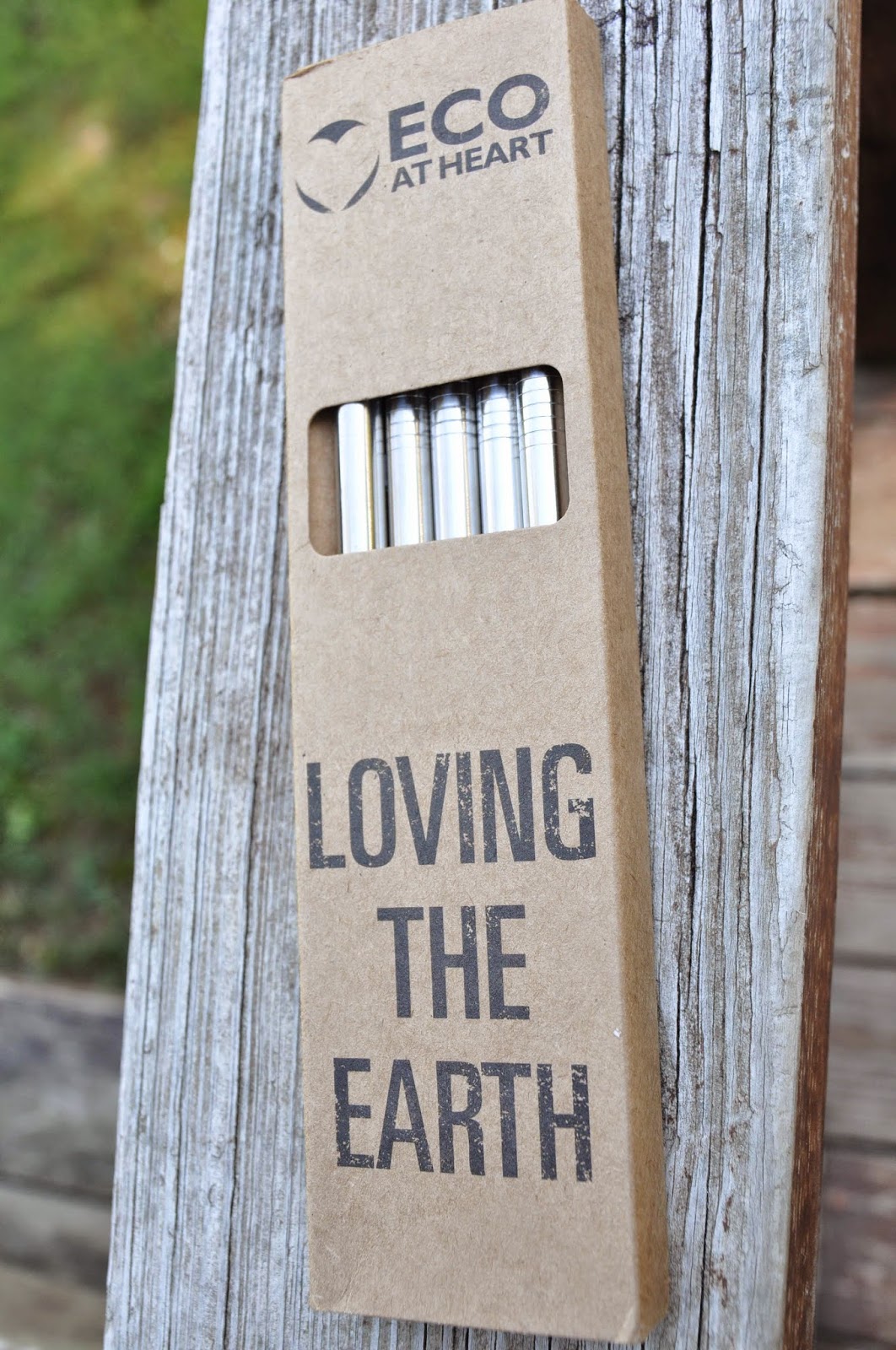 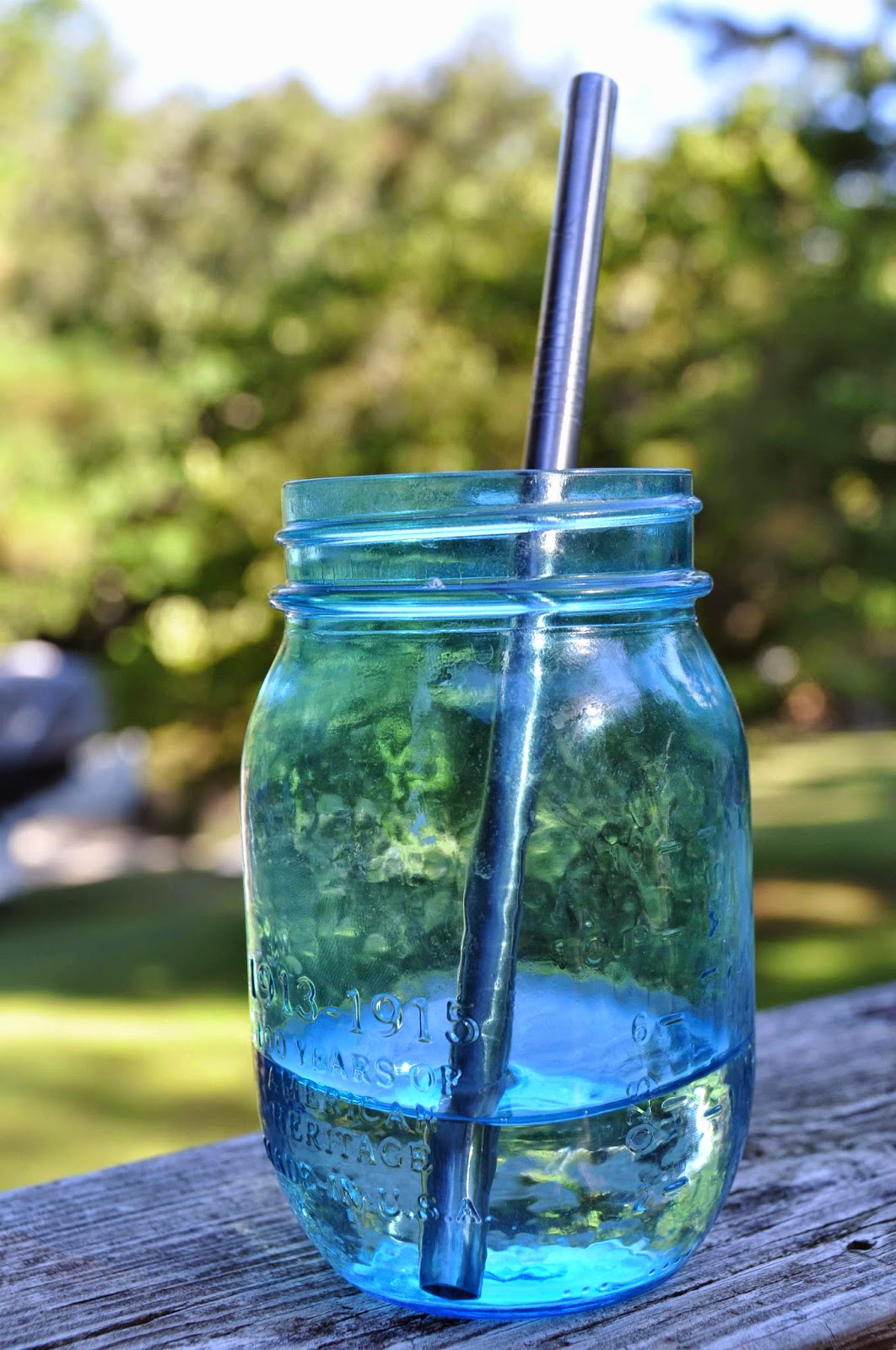 Thanks to Eco at Heart who sent me a pack of there new jumbo stainless steel drinking straws I got to try something new this week. I have to say they are very cool I have reviewed glass straws in the past and I like them for my self but I don't care for them for the kids so much the girls have managed to break a couple of them. I have looked around for a reusable alternative and now I have found one Eco at Heart makes a stainless steel drinking straw. We have banged them around dropped them and they still look great. I love that the kids can break them and the premium jumbo size is great for smoothies.  They come in a couple sizes but I love the Premium Jumbo size the best. They sell on amazon for $14.97 and you get a pack of 5 and it includes a cleaning brush. Click HERE to find them on amazon. Or you can keep reading and Enter the LUCK OF THE DRAW giveaway hosted by Eco at Heart. They are giving away two $50 Amazon.com gift cards for the most "liked" Instagram post that uses the Eco at Heart logo and the hash tag #ecoatheart the more creative the better. they are randomly giving away one set of there straws to 25 individual people who register for the competition by filling out your name and email and by following there Instagram page @ecoheart
The contest will run for 10 Days, and will start on 9/23/2014. Eco at Heart will announce the winner via email and take care of the shipping. Please note that this giveaway is for USA residents only. So follow the link and enter to win. http://ecoatheart.com/eco-competition.html
Please note one entry per person, the winners will be notified by email and will have 3 days to respond with their shipping details or they will re-draw if required.

Disclosure: I received a free sample to try out for this review. All opinions are my own or that of my kids.

Parents! Vote Now to Help Kids Have More Fun - One Playspace at a Time
As parents, we spend a lot of time discovering creative ways to nurture our children's curiosity. Luckily, being outdoors provides the perfect landscape, fueling young imaginations and creating endless possibilities for exploration, discovery and creativity. Children's Claritin hopes to inspire parents to create innovative play spaces in their backyards, and communities.
Children's Claritin also believes in the benefits of outdoor activity for children, and wants to help children get the most out of every day! They're teaming up with KaBOOM!, a national non-profit, to help bring innovative playspaces to communities in need and you can help! By voting, you can help them pick the four community organizations that will receive Imagination Playground™. What's Imagination Playground™? See imagination at play - watch last year's winner enjoying Imagination Playground™.
Be sure to visit ClaritinVoteforPlayspaces.com where you can place your vote and gather playspace inspirations for creating your own backyard playspace.
While visiting the Children's Claritin & KaBOOM! Facebook page, you can also:
Vote now and help us pick the four community organizations that will receive Imagination Playground™. You can vote one time per day through 9/26/14. Click here for voting rules.


In case you haven't heard yet this week is Child Passenger Safety Week. Being the daughter of a retired police Captain car safety is one of my top priorities. I have heard countless stories for seat belts and Child safety seats saving lives. I have also heard stories of child safety seats not being installed correctly and children getting hurt and even had a close friend almost die and end up with a broken neck at the age of 2 because she was not secured in a Child safety seat.  The girls were extended rear facing baby's, they stayed rear facing tell they were just over 2 years old. My oldest stayed in her 5pt harness tell she was at it is limits and has just now transitioned to a booster. In honor of Child Passenger Safety Week the good people at Safety 1st has put together some child passenger safety tips that I would like to share with everyone just in case you need to brush up on your safety seat tips.  I would also like to remind everyone that National seat check Saturday is September 20th so if you haven't had your child's car seat checked recently the 20th is a great day to stop by a CPST and be sure it's still installed correctly.

Car Seat Safety Tips
By the experts at Safety 1st

Importance of Rear Facing
In March of 2011 the American Academy of Pediatrics (AAP) updated their car seat recommendations advising that children should remain rear facing until the age of two.  According to a study in the Journal of Injury Prevention children under the age of two are 75% less likely to die or be severely injured in the event of a car crash if they are rear facing. When a child is rear facing their head, neck and spine are better supported and in the event of an accident, crash forces are distributed over the child’s entire body.

Location
Typically the center rear seat is the safest place for a car seat, and never install a car seat in the front seat.  If your car does not have a latch connector for the middle seat, you can use the middle seat belt to properly secure the base.  When installing, make sure the base of the car seat moves no more than an inch from side to side. An easy way to test this is to hold at the belt path.

Car Seat Expiration
Car seats do have an expiration date, it is recommended that car seats be replaced every 5-8 years, or immediately after a crash.  The reason for an expiration date is because plastic can warp and materials can fray, which can make car seats not as effective in the event of a crash.  Additionally car seat technology and state and federal car seat regulations change over time.  Important warning labels may wear out and instruction books may get lost, which can lead to improper use of the car seat.

Safeguard the Car
Childproof the inside of the car and eliminate projectiles.  Anything in the car that is not secured is a possible projectile – even a child’s toy, or a water bottle. In a crash, objects take on greater weight due to crash forces.

Hey everyone this past Saturday Sept 6th I partnered with LeapFrog and CLIF Kid to host a Fit Made Fun Party. We invited some family and friends over to get there kids moving and playing. We got the opportunity to try out the New LeapBand by LeapFrog and had some great snacks provided CLIF Kid. I set up the LeapBands the night before to be sure they were charged and ready to go. I downloaded the 60 minutes in motion cards and some other great activities for the kids. I think the 60 minutes in motion cards were the favorite of the day. They kids has a blast it was a race to see who could finish first. Some of the parents even joined in the fun. Rock and Role and the Frog Jump were by far the favorite of the day.

The LeapBand is a cool interactive activity tracker designed just for kids to encourage active play and healthy habits with cute customizable pet pals. You can program it for school time and bed time so they are not allowed to play during those times. Kids have to do activities to earn points to unlock fun and new rewards. Kids can even track their progress on the energy bar. Parents can set up 50 different challenges to get their kids active. The LeapBand comes in three colors, blue, pink, green.  They are water resistant and have a rechargeable battery. There is also a Pethathlon App that you can get for smart phones and tablets and the LeapPad ultra. The LeapBand sells for about $ 39.99. You can get at several different places including walmart. You can also click HERE to get it from LeapFrog. My only complaint is the band is kind of stiff and might be a little tight on a bigger kids wrist. The color on the screen is great and the pets are super cute. The activities are a blast and I love that I can set it so they cant play with it during school time. The kids would like it to be a bit louder they had a hard time hearing it when there was more than one of them around.

After all that moving and wiggling the kids were hungry and were ready for a snack. Our snack was provided by CLIF Kid. We received CLIF KID ZBar Protein in chocolate chip, peanut butter chocolate and Chocolate Mint. Each bar has 5g of protein and 3 grams of fiber. Sugar content ranges from 8 to 9 grams per bar so they are lower in sugar content than some of the other brands we have tried. They are also made with organic whole grains. The kids loved these things and they made a great healthy snack. My girls are not much for granola type bars they usually choose carrots over them so I was surprised at how much they enjoyed these. The other kids seemed to enjoy them and even took some of the left overs home.

Disclosure: I received these products free of charge in order to host this party. It was sponsored by LeapFrog LeapBand, CLIF KID, and BSM media.