Right around January just before a big cold front hi that kept us in below freezing temps for 14 days a bob tail cat showed up at our house. It kept hanging out always wanting to be petted. It took to sleeping in a hole under our back deck. The cold front started moving in and it was still around. We accepted that we had been adopted and began feeding her so she could survive the winter. My girls built her a little box out of some expandable foam insulation and boxes. They piled it high with hay and an old towel. They put it near the hole she kept sleeping in and then piled the hole with hay just Incase she wouldn’t go in the box. They built a wind break around it all with some old plywood. I guess she got cold enough and moved into the box. After the cold snap she took to sleeping On top of a box we had tossed out on the back deck. The girls built her a bigger box out of a file box with some hay and a the old towel. She moved right in. She hunts at night and sleeps all day with her head poking out of the box. 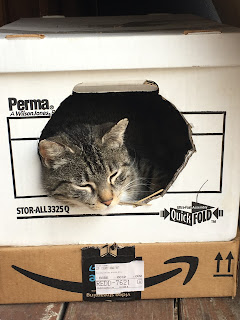