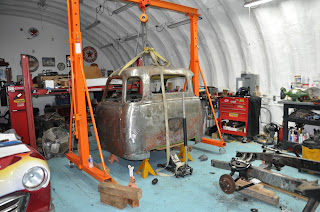 Yesterday was the first day I've had a chance to get into the shop and do some serious work. We pulled the cab and bed off the 53 so that I could weld in some major components of the build. We used the gantry crane to make lifting the cab off easier and safer than trying to carry it with just two people. We now have it set up on blocks and jack stands so that its safe and secure. Its also blocked up so I can get in and do some finish welding and body work. The bed has been disassembled for media blasting and body work. It has one small dent on the rail that needs to be pulled out with a couple studs and the puller.  The frame is coming along, we are at the point where I can finish up some welding and we can get it sand blasted and painted. 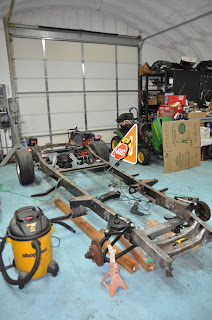 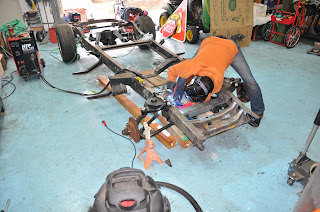 I had two major components to get welded the motor mounts and the transmission cross member that we modified to fit the new LS1 engine. We originally bought a set of dirty dingo engine mounts for a LS1 we were told these particular ones fit the frame of a 53. Turns out that they don't fit and instead of spending more money on something different I simply used my welding abilities and a chop saw and made them work. In this hobby its all about modification. So here are the lower engine mounts and the modified transmission cross member. This is the stock transmission cross member. It needed to be doped a couple inches to work with the new transmission. The original is made of a box tubing. I used the chop saw to cut out a section that was just deep enough to lower the transmission the correct amount. Then I used some heavy plate to box in the area that I cut out. I bolted it back in the frame and welded up the modifications. 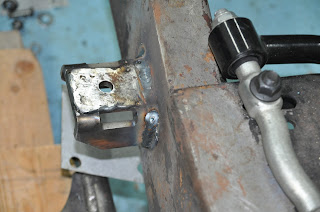 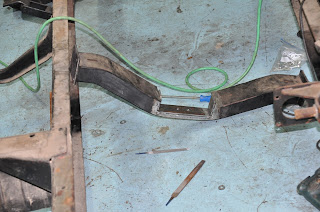 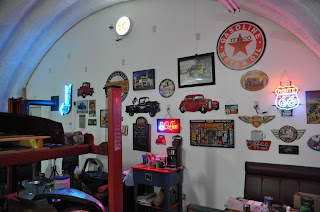 This is the back wall of the shop we have added a few more signs and posters to the wall. Its really starting to look good. We still have room for a few more Led signs. 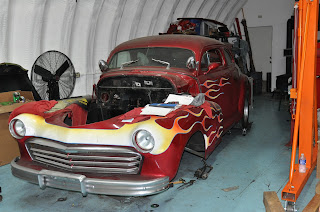 This is Mary Lou the 48 she is getting a new front end and a rear end upgrade. Every girls dream right.