We took a field trip to Elephant Rock State park. We go several times a year, usually we go with our homeschool group, but this time our schedule just didn't work out. So we ventured out on our own the girls love this trip. Elephant Rock State Park is located in the great state of Missouri in case you are wondering where its at. The park its self is around 7 acres. Originally it was a granite quarry the granite that was extracted from the earth there was used to pave streets and build buildings in Saint Louis Missouri back when it was first built.The Quarry opened in 1869 and ran tell some time in the 1900's. There is a trail there that lead you around the quarry with signs that tell you bits of history and what things are. There is an old train house where the trains that hauled the granite were worked on. You can see where they took drilling samples and remains of an old boom anchor that hauled granite up out of the quarry. You can run your hands over the names of the men who chiseled their names into the stone as they made master cutter back in the 19th century. Its quite an amazing place to see. No official census has ever been taken of the park so we don't know how many elephants are actually in it. But we learned that they believe the largest rock in the park is 27 feet tall 35 feet long and 17 feet wide her estimated weight is to be around 680 tons


This is the view from the highest point. We stop here every year and take a picture this year I did a Panorama. As you can see the leaves are just starting to change here in Mo.

This is the Quarry it's 30ft to the top of the water and its 40ft deep. I have no idea who that guy is sitting on the right. He was just there when I took the picture and he knew I was taking it cues he waved. I guess we will have to photo shop him out before I print. 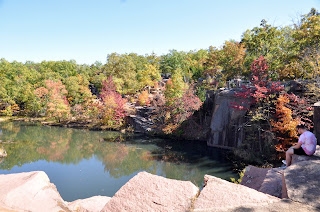 This is just a really big rock I though I would post it to give you a perspective of how big some of the rocks are. Those are my girls and Nana and Pop. 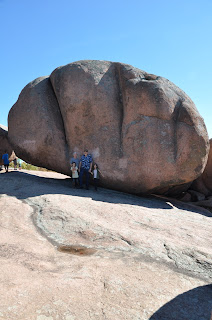 I hope you enjoyed our adventure !
Posted by Julie at 5:52 PM